Ben how are you today? Tell us a bit about your music style

I’m great today, thanks for asking.

Well, how do I describe my music style… it’s ever evolving.

But most people know me for my acoustic guitar, singing and song-writing…lots of reggae and rock hugely influenced from John Lennon and Bob Marley, but I also electronic psychedelic trance stuff. 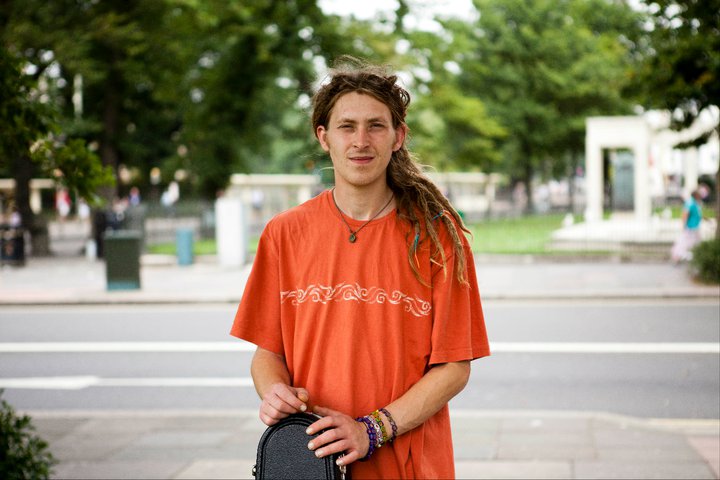 What has been your biggest challenge so far?

In terms of my music I’d say the biggest challenge I’ve had is having the confidence I was good enough at music to be able to secure gigs. It wasn’t until I played some gigs a couple of years ago and smashed it that I thought ‘OK maybe I do have a little something for the world’. Selling music online has also been extremely difficult as there is so much out there.

How did you overcome this?

Well in terms of gigging you’ve just got throw yourself out there. I know people now that never had any intention of being a musician but they are rocking gigs, doing tours and selling music. Being a street performer has also been a massive part of my life, so I’ve gained a lot of experience and confidence with my music that way, and have also made a lot of very good friends along the way. Yeah ,getting out there on the street did it for me.

What inspired you to donate half of your song sales?

It’s only my music purchased via my Reverbnation page that gets half donated to ‘Every Mother Counts’.

There was a couple of reasons for doing that I suppose, the first being that it is my little way of doing some extra good for the world. I still raid my penny jar from time to time to get the milk and bread in and I don’t have a lot of money so this is my way of giving when I know I can afford to.

I grew up in care and have had foster brothers who’s mums have died of illness and stuff so what this charity is doing for people on a direct level is great stuff.

I also thought the ethos might fit with the bright-minded forward-thinking fan base that I’m trying to attract.

Can you tell us what you have planned for the year?

Finally get this album recorded. It will be my first album that has actually been studio mastered and I really want it to be something which says ‘this is what I can do’.  I’ve never really had the time or the space to really do a proper debut album like this without it having to be rushed out or life taking another path, or me getting distracted!

I’ll be doing lots more busking this summer and some more gigs with my acoustic stuff. As for my electronic stuff, I’ll be knocking it on the head for a bit and looking to just focus on my singing/song writing with established producers.

You talk about escaping the ‘matrix’ – what does this mean?

Well as always what seems to be reality or not is open to interpretation. But to me the matrix is the whole bunch of systems that completely distract us from the simple and most meaningful things in life.

I always try and keep a positive spin on all my songs to keep things up beat, but really in my heart I know things are messed up.

I grew up with my mum who was mostly single for most of my childhood and I was the eldest of three at the time. I’ve always seen how despite how hard a lot of people work, this whole world has a lot of white-collar fraudsters that have always made it hard for us to get by and easy for them, they are the matrix.

For me that is the matrix. The world we live in, but not the one we really truly are.

I’ve really started to get into listening to UB40 over the last couple of years, they nailed it with a lot of their songs I think.

Well it varies extremely, so many of us doing music these days that I guess it depends on the choices you make, chances you take and your motivation.

Busking has helped me scrape by financially whilst being able to write songs and practise stuff which is great, I’ve also met many other musicians doing it and got gigs too.

But I think the experience varies so much depending on who you are.

It can be a slog of a journey if you don’t know where to look, and sometimes life-factors can come into play, so really I’m at a point in my life now where I think I might need a manager.

At this point in your career, what is the main advice you would want from an online tax return service?

That’s an interesting question, I wasn’t really expecting that. Hmm… On a serious note I would say like, how many gigs a year I would need to play to be able to sustain a decent living and stuff. I’m terrible with financial stuff and that though to be honest.

What does freedom mean to you?

I might need to go out for a little walk or something before I answer that, you’ve blew my head off, that’s very deep!

I think its many things for many different people to be honest. An ever changing feeling depend on where you are, where you’ve been or where you are going to.

It’s like, we often seem to think money equals freedom, but what use is winning the lottery if you still don’t really truly see and feel the world around you. Is freedom being served champagne whilst not realising your escapade is often a plastic circus?

I guess I know what freedom isn’t more than I know what it is. On my own personal journey freedom means not to be distracted by the things that I don’t need to waste my time on, things that take me away from feeling spiritual.

Freedom for some of us becomes a personal thing, life can throw all sorts for some people and I guess depending how we deal with it we can become trapped and absorbed.

Do you see yourself as a music artist as well a ‘business’?

I definitely see myself more of an artist than I do a business. I know that the business side of things is crucial to help get by in life but the business would never be there without the art. Not for me or anyone else that loves it anyway.

Music for me saved my life, really it did. It’s way more than ‘a business’.

Back in my days living on the streets in London as a teenager, I would sing to myself for hours at night in doorways, maybe I was just entertaining myself but I always loved music.

Others could see that artistic side of me too I think when I was growing up, I was taught a few chords on the guitar by one of the staff members in a kids home I lived in for a bit, and also by some squatters during my time on the streets.

I’ve always tried to take pride in my busking, get really into it and love what I’m doing..

I actually start feeling weird after about a week if I haven’t been singing and belting it out!

What is the biggest accomplishment you would like make in the next 5 years?

Get the right band together, do a few more albums and tours as well as make a few music videos also. I’d really like to gig internationally too. If I can do all that whilst promoting some of my messages, that’s good enough for me.

Thank you for taking the time to do this interview with me! Where can we find and follow you online?

My pleasure, and thanks to you for giving me the chance to promote my music.

You can find heaps of completely different stuff I do by entering ‘Ben Westwood Fractal Moon’ into google, including blogs I do about all kinds of different stuff.

Thanks I’ve really enjoyed doing this interview. It’s really made me think! One love.