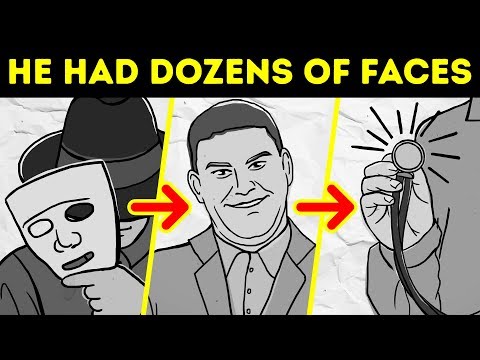 A Legendary Man Who Had More Than 10 Identities

By On Jun 9, 2019
0
Share
When you were a kid, what did you want to be when you grow up? A teacher? Doctor? Scientist? How about all of the above plus some? Ferdinand “Fred” Demara, also known as The Great Impostor, rose to fame back in the 50s with his impressive credentials. Only, it wasn’t exactly his resume he was beefing up!

As a kid, he loved playing tricks on people. He discovered his gift of manipulation when he managed to trick a local candy-store owner into giving him free chocolate. Since his dad was a projection operator in a local movie theater, Fred grew up being surrounded by photos of actors and movie stars – perhaps that was his inspiration for things to come…

TIMESTAMPS:
Fred steals different identities 0:59
Teaching psychology at a university 1:25
How he ended up in a prison 2:43
His new persona, a biologist 3:45
Fred becomes a Navy surgeon 4:43
Job at the Department of Corrections 6:56
Why he had to give up the fraudster lifestyle 8:35

SUMMARY:
– At the age of 16, Fred ran away to join a monastery and become a monk. He left the monastery 4 years later and decided to join the Army.
– While he was there, he’d go through University catalogs in his free time and read the credentials of each professor. That’s how he got the idea to steal a different identity that would help him become a teacher.
– Once ol’ Freddy was all studied-up, he started a new life teaching psychology at a university in Erie, Pennsylvania, under Dr. French’s name.
– Being a medical assistant wasn’t the job for him, but he did acquire a lot of medical knowledge that would benefit him later on.
– Demara even became friends with the local Sherriff Frank Tamblin. Perhaps he was living under the philosophy of “keep your enemies closer” but that didn’t stop the police from investigating this ubiquitous Dr. French.
– His new persona was Dr. Cecil Hamann, a biologist from Kentucky. Using this guy’s credentials, Fred got a job as a research biologist at a Harvard-affiliated hospital.
– Then Demara became friends with Dr. Joseph Cyr. Not long after that, a certain Dr. Cyr would be enlisted as a surgeon for the Canadian Navy. (That, of course, was our imposter Fred Demara with the doc’s papers!)
– After the Canadian authorities had finally discovered Demara’s true Identity, they also found out about the other identities he’d used.
– In 1955, he re-appeared in Texas under the guise of Dr. Benjamin Jones. He worked as a professor for a while but moved on to become a prison guard.
– He had to give up the fraudster lifestyle due to his health. He became a chaplain in a hospital in California and went on to live a quiet life.
– Nobody really knows why Fred Demara had spent so many years stealing identities. Perhaps it was the rush, the adventure, or a thirst for something new?

Tax Deductions For Home Based Business
How to Make Money Writing a Blog – Our Story from $0 to 10k per Month!
Make Money Blogging (How We Built a $100,000/Month Blog) 10 Steps for 2019
How To Start A Blog 2019 – For Beginners
6 Self Employment Ideas For Moms
California Tax Attorney Free Consultation
bright side
0
Share FacebookTwitterGoogle+ReddItWhatsAppPinterestEmailLinkedin

Which Kindle Fire is the Best To Buy?